Little did we know when we came up with the title for our world peace forum that it would capture the essence of the program’s conclusion. But it absolutely did.

“World Peace: Let It Begin with Me.” That was the title and it was the take-home message for the nearly 200 students and members of the public attending Thursday’s (Nov. 14) forum that the Institute co-sponsored with Rotary International, Seeds of Peace, and Tri-Sense Medical, LLC. Besides a nearly full house at the Digitorium, which seats 200 with chairs along the back wall, the forum was webcast to three other campuses in the SPC system.  The results exceeded our expectations. 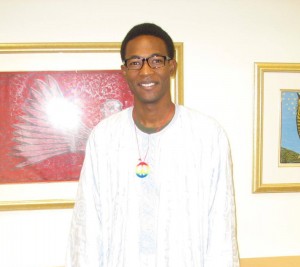 Contrary to hopes, it seems that world peace may not be achievable, because conflict between humans is inevitable. But, the panelists agreed, it is the responsibility of each person to live and act in ways that promote peace instead of war, dialogue instead of violence, in pursuit of the ultimate goal of a peaceful world.

There was general consensus among panelists that war is a blot on global society no matter how distant or isolated the location of the conflict. Asked about Americans’ responsibility to the people of Mali, beset by a jihadist uprising in 2012, Prof. Lightfoot said, “We have a moral responsibility to prevent war. Pain in one country is a pain felt by all. We are a global community.”

Haidara, who has seen war up close in his hometown of Timbuktu, Mali, had a readyanswer for Moderator Slater’s question about the cause of conflict: Inequality. “In Mali, a common denominator is lack of education, access to clean water and adequate food, inequality between men and women, lack of jobs, denial of social justice.”

Lemke said civil behavior in day-to-day life, such as traffic encounters or relationships with friends and family, contributes to peace in small but meaningful ways. “You probably already have had 15 chances to show peace today,” he told the mostly-student audience. He also encouraged students to become civicly engaged in their communities in pursuit of peace. “As students you have more power than you think,” he said. “Call up the mayor. He is more likely to listen to student voices than to a 40-year-old like me,” he said.

The level of interest shown in the issue of world peace told us we have only scratched the surface. Therefore, we are already looking at the next phase for this initiative. Stay tuned.

Posted under Uncategorized by Shontae Williams 15.11.2013