An Encounter with a Living Legend 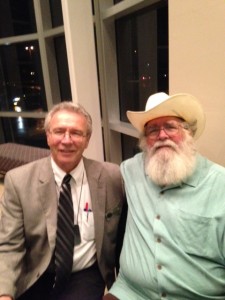 Clyde Butcher is an original – a genuine Florida character who defies alligators and mosquitoes in the muck of swamps to capture his priceless images of pristine nature and who minces no words in telling anyone who listens how poorly the state has managed its natural resources.

Clyde shared some of those images – and insights about how he shoots and processes them – along with choice words about the pollution of the Everglades, the state’s natural springs and its rivers, in two presentations sponsored by the Institute for Strategic Policy Solutions at St. Petersburg College on Jan. 29th. The eccentric photographic artist, in full Florida cracker regalia of flowered shirt, straw hat, baggy pants, croc shoes and chest-length white beard, commanded the room as he highlighted his life and his art in separate presentations to a student forum in the afternoon and a Village Square dinner program in the evening.

Butcher, often referred to as “the Ansel Adams of Florida,” is a gentle giant of a man who morphs into a mystic when you get him talking about the connection between the human spirit and nature. In his Village Square talk, he spoke of a communication bond between trees and plants and a chemical reaction in humans when exposed to a forest – a positive reaction. He speaks of wilderness as being “a sacred necessity,” and recounts how, after the tragic death of his son at the hands of a drunk driver in 1986, he went into the deep woods of the Big Cypress National Preserve where “the mysterious spiritual experience of being close to nature helped to restore my soul.”

There is similar tone of mysticism when he speaks about his art. “I make pictures large enough so that you can’t see them,” he says in reference to his large-scale – as big as 4-by-5-feet – black-and-white photos of nature. “You have to scan, and the mind puts together what you see. I want you to see the sky, and veins in the leaves.”  The unique perspective of his pictures, along with the scale, “make people feel like they want to walk into them. I want people to be drawn in and feel their way through the environment.”

Yet in his public talks he is plain-spoken, talking nonchalantly about wading in chest-high waters teeming with gators and water moccasins to set up his tripod for the perfect shot, and in giving a humorous account of helping President and Mrs. Jimmy Carter briefly elude the Secret Service on one of his frequent “swamp walks.”

And he is blunt when talking about the greatest threat to the Everglades. “In plain English, its s—,” he says, using the four-letter word for human waste. The incursion of development to the very edge of the Glades – in some cases beyond the edge – and destructive forms of agriculture such as sugar cane fields to the immediate north have done immense damage to the quality and quantity of the watery expanse named the “River of Grass” by Marjory Stoneman Douglas in her landmark book about the Everglades.

Clyde bemoans that careless regard for pristine wilderness as he disdains the politicians who pay lip service to environmental protection even as they strip funding from restoration programs. But he worries more about an even greater threat to the Everglades: sea level rise brought about by climate change. By 2025 – just 11 years from now – the Glades will be under water, he told me after the evening lecture. Extraordinary tides are already inundating parts of the preserve, and they will only get worse in the next few years.

The only solace to be found in that gloomy prediction is his promise to continue photographing those doomed patches of Eden even into his eighth decade. At least we will have his pictures to remind us of what once was. And those lucky enough to have attended his lectures will have the memories of having rubbed elbows with a living legend.

Posted under Uncategorized by Shontae Williams 03.02.2014