Medical Marijuana is a Smokin’ Issue 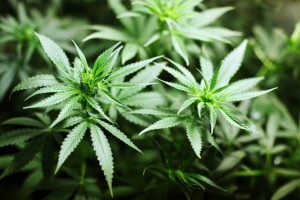 As a political issue, medical marijuana is as hot as any issue I have seen in Florida in many years.

That is clear to me after attending two recent forums on the topic in the Tampa Bay region – at the Manatee Tiger Bay Club in Bradenton and at the Sarasota Tiger Bay Club. So be prepared for passionate debate when the Institute for strategic Policy Solutions presents its forum on April 17th at the Seminole campus of SPC. The forum, titled “Medical Marijuana: Should Florida Go to Pot?”, will be a program of the Institute’s Village Square series, and advance registration for the dinner event is required (at spcollege.edu/solutions).

The Sarasota Tiger Bay Club debate on Feb. 12 featured Orlando attorney John Morgan arguing for passage of a constitutional amendment legalizing marijuana for medicinal purposes and Sarasota County Sheriff Tom Knight arguing against passage. Morgan is head of Morgan and Morgan, the personal-injury law firm whose “if you or someone in your family has been injured” commercials are seemingly everywhere on local TV. He is also the attorney who personally bankrolled the initiative petition campaign that helped put the medical marijuana issue on the Florida ballot this November.

Morgan said his passion for legalizing marijuana for medical purposes began with his father’s cancer and his brother’s spinal cord injury. His father was in “unbelievable pain” and had lost his appetite. Like many cancer patients, he was “wasting away,” Morgan said. After Morgan procured some marijuana for his father, his appetite returned and his pain was greatly relieved, he said. As for his brother Tim, who became a quadriplegic after a diving accident, marijuana relieved “uncontrollable spasms” and pain, the attorney said.

Sheriff Knight warned that legalization of marijuana would  “have significant negative consequences” in three areas: Greater access to pot by teens, increased crime, and reduced quality of life, including lowering of property values. This has been the consequence of  legalizing the drug in California, said Knight, displaying a map of Anaheim with 43 red dots representing medical marijuana dispensaries spread out across a community of 325,000. Sarasota, with a population of 375,000, could see a similar proliferation of pot dispensaries, likening them to the “pill mills” that sprang up to provide prescriptions for Oxycontin pain pills until Florida cracked down two years ago. Knight warned that children would be able to access these dispensaries without a prescription and without their parents’ consent, points that Morgan refuted. Florida would only have as many dispensaries as the state Legislature allows, he said, adding that Florida will learn from California’s mistakes. 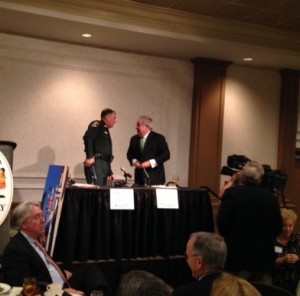 The marijuana available today is three times more potent than it was 20 years ago, Knight said, and is highly addictive. One in six persons who try marijuana as teens will become addicted, he said. Morgan argued that many legal drugs approved by the U.S. Food and Drug Administration are also highly addictive and far more dangerous than pot, citing Oxycontin, Xanax, Percocet, Ativan and Adderall in scathing attacks on the FDA.

“I don’t know why God put this plant (marijuana) onto this Earth for us, but He did,” Morgan said. “And it works. For a lot of really sick people, it works.” Countered Knight: “I am scared to death of a crime wave,” citing the lure of the cash-only dispensaries to the criminal element, including Columbian cartels.

The Manatee Tiger Bay debate featured similar warnings from Dr. Jessica Spencer, an addiction specialist, and Dr. Fabian Ramos, a physician specializing in pain relief. The pro side was represented by Cathy Jordan, who uses marijuana to ease the pain and health issues associated with ALS disease, and Donnie Clark, a farmer who served time in prison in the ‘80s and ‘90s for growing marijuana. Dr. Spencer said marijuana is more dangerous to smoke than tobacco, and said she considers medical marijuana as “a stalking horse” for full legalization of the drug for recreational purposes, not just medicine. She cited statistics about the negative effects of marijuana use on job performance, absentee rates and increased incidence of impaired driving. Dr. Ramos also worried about the dispensaries becoming versions of the “pill mills” that prescribed pain pills for virtually any complaint, and repeated Sheriff Knight’s concern about teen access to pot and higher crime rates because of the cash-only nature of medical marijuana sales.

Mrs. Jordan spoke of the therapeutic effects of marijuana to relieve her ALS symptoms, and Clark advocated growing marijuana as a cash crop to enhance agricultural profits – not for ingesting purposes, but for production into hemp, a natural fiber.

The Institute’s debate on April 17 will feature similar lively exchanges, with plenty of opportunity for audience participation. Watch for details to come soon.

Posted under Uncategorized by Shontae Williams 14.02.2014