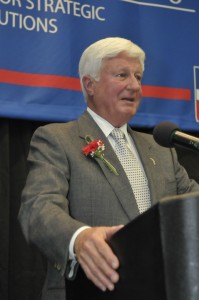 A new tradition was established at St. Petersburg College last week with inauguration of the Distinguished Public Service Award Dinner. The Feb. 21st event, staged by the Institute for Strategic Policy Solutions at the Seminole campus, honored Dennis L. Jones, a former SPC Vice President , for his 32 years of public service as a state senator, state representative, civic leader and doctor of chiropractic medicine in St. Petersburg.

Nearly 200 people, including 18 current or former public officials and a large number of SPC administrators and staff, filled the Conference Center at Seminole to honor the work of Sen. Jones specifically but also to recognize exemplary public service in general.  As Dean Susan Demers of SPC’s College of Policy, Ethics and Legal Studies put it in her role as master of ceremonies, the ancient Greeks considered public service to be the highest calling of mankind, and Sen. Jones epitomized that quality in his career and life.

SPC President Dr. Bill Law opened the program by recognizing Sen. Jones for his role in funding and creating the Institute for Strategic Policy Solutions, which serves as a conduit for civic engagement and academic enrichment within SPC and the community, and also represents all 28 members of the Florida College System in the public policy arena.

In summing up Sen. Jones’ career, speakers focused on the important legislation that he had a major role in passing as well as on his skill at building consensus by working across party lines. A humorous note was provided in a video message by former House Speaker Fred Lippman, who served with Sen. Jones in the Florida House for 20 years. Dr. Lippman, now chancellor at Nova Southeastern University, said that the two of them were responsible for passage of more legislation in that period than any other legislators.

Posted under Uncategorized by Shontae Williams 04.03.2014