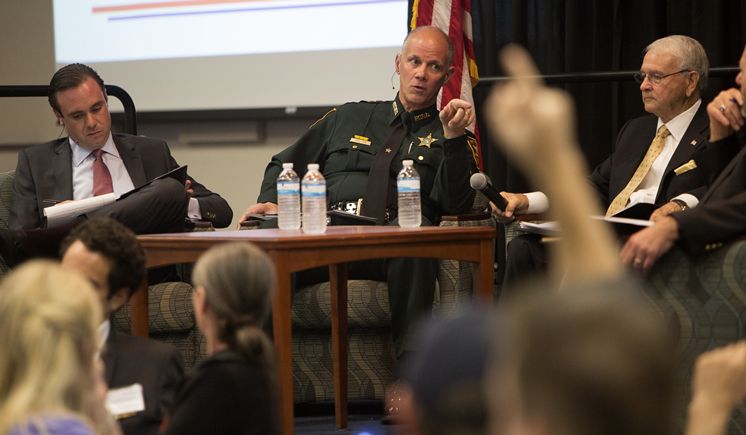 I was correct in my previous blog on this topic: Medical marijuana is hot. In fact, if you thought the furor over the Affordable Care Act, otherwise known as Obamacare, was super-heated, just wait until this fall. In Florida, Obamacare will take a back seat to the debate over legalizing marijuana for medical use, which Floridians will be asked to decide in the Nov. 4 election.

That was confirmed at the Institute’s Village Square forum on medical marijuana, held at the Seminole campus Conference Center on April 17th. The question of legalizing marijuana for medical purposes, the subject of a proposed amendment to the Florida Constitution, is loaded with emotion, ideology and a great deal of conflicting information. That came through loud and clear at our debate, which featured proponents from the two major organizations in the battle for the hearts and minds of voters: Ben Pollara of United for Care, who supports the referendum, and Dr. Carlton Turner, former director of the Office of National Drug Control Policy under President Ronald Reagan and spokesman for Save Our Society From Drugs, who opposes it. Also weighing in with the view of law enforcement officers was Pinellas Sheriff Bob Gualtieri.

Much like fencers with foils, the speakers parried with statistics and assertions. Pollara tugged at heartstrings with references to sick people who benefit from the medicinal effects of marijuana, a number of whom were in the audience. Turner countered with warnings of out-of-control marijuana accessibility by teenagers and children, whose developing brains can be damaged by pot use. Sheriff Gualtieri worried that the reference in the referendum summary to “debilitating conditions” is so broad that it will lead to widespread abuse of the drug by unscrupulous doctors looking to make a fast buck, much as they did in setting up “pill mills” to hand out prescription pain pills a few years ago.

“It’s all about money, making money,” said the sheriff. And, he added, “It’s a segue to recreational use” of the drug, a point also made by Turner.

The debate can be boiled down to a relatively few points of contention – wide, gaping differences of opinion, to be sure,  but not all that difficult to understand. Here are the essential arguments of the two sides:

On the con side:

On the pro side:

During the forum, the Institute staff invited audience members to take part in three separate “straw votes” via cellphone texting to measure attitudes toward medical marijuana. In the first survey, before hearing any arguments, the survey breakdown was: For legalization, 39 percent; against legalization, 18 percent; undecided, 44 percent.

In mid-program, after the audience had heard the opening presentations by the three panel members, the results had changed significantly. The number for legalization had jumped to 74 percent, while the number of undecided dropped to 9 percent.  Those against legalization dipped just slightly, to 17 percent. Apparently, Pollara’s arguments for approving legalization of marijuana for medical purposes were persuasive. 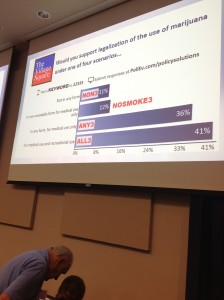 In the final survey, audience members were not offered a choice of being undecided. Instead, they were asked their view of medical marijuana in one of four scenarios:

-Not in any form: 9 percent

-In non-smokable form for medical use only: 11 percent

-In any form, for medical use only: 43 percent

-For medical use and recreational use: 36 percent

So, those opposed to legalizing marijuana for medical use dropped into the single digits. Those who think it should be legalized in some form total 54 percent, with 11 percent of those favoring its use in non-smokable form only. And a surprising 36 percent are in favor of legalizing it for recreational as well as medical use – a segment I found surprising in a conservative state like Florida.

Where all this will end in November is anyone’s guess. As we emphasized in instructions for participating in the polling, these were straw votes only – since it was not a random audience, it bears no scientific validity. Yet is provides interesting fodder for speculation as the campaign heats up – and perhaps a sense of direction for the opposing campaigns.

Posted under Uncategorized by Shontae Williams 24.04.2014