Our story (and we’re sticking to it)

Tweet
“Village Square is unique in the country. So Tallahassee is producing a model for the land. I wanted to come and see why and how.”
National Endowment for the Humanities Chair Jim Leach

The Village Square first formed after a divisive local referendum on whether to buy into a proposed coal plant nearby. The debate quickly turned into an expensive PR campaign that obscured the facts more than it educated the citizens. It also became all about liberals vs. conservatives and all the national issue baggage that comes along with it.

To tell the story properly, you’ll have to meet Allan & Bill: Allan Katz (a Democratic City Commissioner) and his good friend Dr. Bill Law (the Republican Tallahassee Community College President). Bill was for the coal plant, Allan against. It seemed like Bill, Allan and some of their best friends were about the only ones having a real conversation about the coal plant, complete with an effort to understand facts and higher level reasoning now and again. That’s Bill and Allan jogging—>

The organizers of The Village Square thought there must be a better way. The organizers specifically built the first board of directors – which is always bipartisan – from both sides of the coal debate in Tallahassee to make it clear that they were undertaking a new way of doing business. For good measure they even invited everyone to dinner and let them have a mature adult conversation about Tallahassee’s energy future. To set a friendly tone, organizers put them in a line-up. 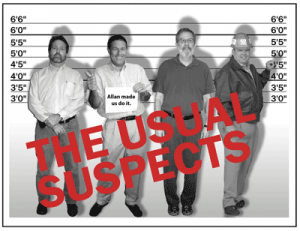 In 2012, they also helped birth the St. Pete Village Square at St. Petersburg College, where Bill Law became president a couple of years prior.  As the first offspring of  Tallahassee Village Square, we are endeavoring to follow in the footsteps of Tallahassee by offering similar programs in the same spirit of civility and bi-partisanship.

To date, we have tackled such controversial issues as FCAT and Common Core Standards, Immigration Reform, Climate Change and Sea Level Rise, the Gun Culture in the U.S., and Erosion of Civil Liberties in the name of National Security.  The dinner series has drawn a wide range of citizens and sell-out crowds to civil fact-based dialogue on some of the most divisive issues of our time.  In everything we’ve done, we have quietly defied the national trend toward fact-free partisan food fights on full display on issues like the health care debate – to reconnect local community, the common sense foundation of American democracy. It’s a crazy notion, but we think it might catch on.